A very good friend of the family, who is Jewish, was in the mall with her four-year-old.  He spotted Santa, and asked if he could go see him.  The line wasn't very long, so she said yes.  When her son got to the front of the line she saw him having a very serious conversation with Santa, who then motioned to his helper elf to hold the line.  Santa escorted her son back over to her.

"I'm a little curious about your son's request." Santa said.

She laughed and told Santa that they were Jewish

, but the only ones on their block, so they are surrounded by twinkle lights

It was almost three years ago, but that one cracks me up everytime.

My other favorite holiday kid moment was last Christmas eve, which I spent with my Amazing Goddaughter.  They are a "presents on the Eve" family, so I get the pleasure of watching her open her gifts.  Last year was particularly special because my Charming Suitor, then so new to my life, came as my date and, well, Charmed everyone, including AG, which made me all warm and fuzzy.  It was probably the moment I realized that not only did he and I seem to fit, but that he was going to be a good fit with the people I love.  We were watching AG open her huge pile of presents, half of which are from real people, and half of which are from "Santa".  She got to one of the "Santa" presents and tore into it.  It was a large stuffed lion

.  (She was going through a major big cat phase.)

Her whole face lit up and she hugged it tight and said "Mommy!  Santa got my message!  I asked for a Tiger, but Santa knew I wanted a LION.  Santa is magic!".

CS, who had his arm around me, squeezed me tight as we were laughing and said "She's amazing." Which she is.  And so is he.  I can't wait for this Christmas Eve, to see what Santa brings her and how she reacts.  Even better, is that now she and CS really know each other.  She was talking to her mom last week, and was saying that one of the things she loves about her grandmother is that she is such a good cook.  "Like Chef Denise, and Stacey, and B."  Her mom looked at her and said, "Uncle B?" And she rolled her eyes, with the five-year-old version of "Oh Mom, you're so silly" and said "Um, NO, Stacey's BOYFRIEND."  Kid has exceptional taste.

What about you?  What are your favorite holiday kid stories?  Best one gets aGlee Gummies Kit

, so you and your kids can make your own Gummy Candy!  A perfect cold day activity.  Comment below with your kid story to enter before 11:59 PM CST Dec. 18, winner announced on the 19th. 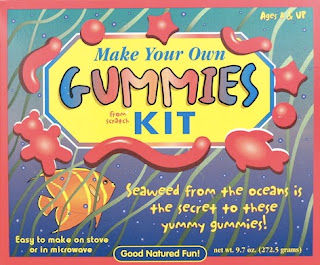 Yours in Good Taste,
The Polymath
Posted by Stacey Ballis at 1:28 AM