First off, I want to express my deep and genuine gratitude to everyone who participated in last week’s “Get Stacey to #40 on Amazon on her 40th Birthday” challenge. While we didn’t quite get all the way there, we did get me as high as #991, which is pretty freaking awesome, especially considering that I began the day at #852,136!

So thank you to those of you who pre-ordered your book, and encouraged others to do so. For those of you who have not yet pulled the plug, I’m a big believer in belated birthday presents and will be just as excited to watch my numbers this week as well!
Click Here to Pre-Order

In addition to the festival of pre-ordering, there was much fantastic celebrating. Some fellow Geminis and I celebrated en masse last Monday, which was a true delight. Then the family and best pals party sponsored by Mom and Dad was on Tuesday. So amazing to be in a room with so many of my most favorite people, some of whom had flown in for the occasion from faraway places. Little Sister gave a beautiful toast, reminding me once again that she is the best damn present my parents ever gave me. Dad spoke on behalf of himself and Mom, and let me just say that it is a very good thing I had access to a hankie. Dinner was nothing short of spectacular, thanks to chef Gil, and if you are anywhere near Chicago (or planning a visit) I implore you to come to his restaurant Chalkboard and partake of his bounty. Four words. Smoked Gouda Mac ‘n Cheese. (for a little review I did, click here)


Then Charming Suitor made a very beautiful speech which made me cry all over again. I know I don’t give too much away on that front, and there are many of you who want more details about my lovely CS. I adore you all, but it is important to me to be sensitive to the fact that CS signed up for me, but not for having his whole life exposed to the world. And there is stuff that I like to keep for just us.


But I will say the following, feeling confident that it is okay to share:


He is, without a doubt, the most extraordinary man I have ever known, and while I knew love like this existed in the world (having witnessed it in my parents’ relationship), I had never felt it firsthand until now. Everything I ever wanted, even the little stuff you are always afraid to even put on your list, and a whole bunch of stuff I didn’t know I should be wanting. He is taking very good care of me in every possible way and I am in a fairly constant state of joy.


Which seems to be apparent to everyone, since my Dad publically toasted CS for “putting that s***-eating grin on her face”. Not kidding.


After I finished being blown away by my great good fortune of having found such a lovely man to make a life with, and got my weepies under control, it was time for cake. 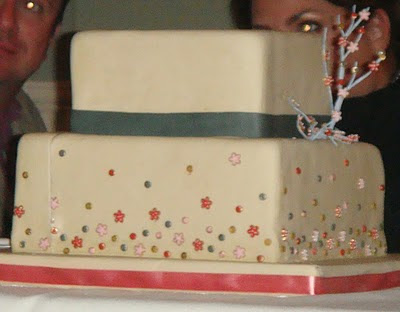 Sweet fancy Moses, this was a good cake! (and yes, that is the lovely Jen Lancaster

and her hubby Fletch with the devil eyes lurking behind the cake, and yes, I did try to get the red-eye out, but could not)

I got it from Vanille Patisserie, and they did an incredible job. Banana cake with caramel cream and fresh sliced bananas and vanilla buttercream frosting. Oh. My. Goodness.

(And if you don’t think it was a nice pairing with the impromptu Manhattan Milkshakes Gil whipped up, you would be very very wrong.)

I could not have asked for a better birthday, but it wasn’t over yet, since my beloved CS had been planning to whisk me away to an undisclosed location for the weekend, turning the week into, by his accounting, full-on Staceypalooza. (Have I mentioned I am a very lucky girl?)

He was very keen and cunning and (with some help from Little Sister) planned the whole trip and kept it secret until the very last minute. I didn’t know where we were going until we were waiting for the cab to the airport!

And let me just say, if you have never been, GO. It is a wonderful city. We stayed in the Old section, with cobblestone streets and very cool architecture. CS snagged us reservations at three spectacular restaurants, and all three tied for the best, we just could never choose between them! If you could even get to just one on your visit, you will not be disappointed, see below for info.

We walked the botanical gardens, saw the Olympic stadium, went antiquing, and found very cool little boutiques. We tasted the traditional Montreal Bagel at the Fairmount, which was fantastic and chewy and lighter than a classic NYC bagel. We partook of the famous Smoked Meat sandwiches at Schwartz’s, sublime salty meaty goodness, and a place to give Manny’s a run for its money. We tasted old fashioned Maple Snow Candy at a historic street fair, and wandered two of the best markets we had ever been to. The city is both old and new, French and Canadian, cosmopolitan and village. The best of all worlds.

They do fail at signage, so if you go, don’t be surprised to constantly be exiting Metro stations to discover no direction at all to get you to the places you are there to see! Be sure to keep your maps with you, and don’t be afraid to ask for directions.

I, on the other hand, fail at walking, and managed to sprain my ankle for the eleventy-millionth time at the end of our second day. Not the worst, as CS caught me mid-swanlike flight, so not as bad as it might have been had I ended up face-planting in the middle of Saint Something or other Boulevard. But it is a darling and refreshing shade of blue, and somewhat squarish with swelling. It goes at this point nearly without saying that CS made sure I had Advil

and ice packs and a steadying wrap, and other than one or two cabs we might have avoided, it did not unduly hamper the rest of the trip, nor diminish our enjoyment.

Amazing amazing week all the way around.

In other news, there are going to be some exciting features here in the old Chronicles in the coming weeks. We are going to have two new regular cooking posts! The Parlor and The Kitchen on Tuesdays, which will highlight my favorite cooking equipment old and new, fantastic food-reads, good sources for cool stuff for entertaining and tableware, as well as gadgets galore. And Feasting Fridays will have information on fun ingredients, and either original recipes, (or ones from friends who share theirs, fully attributed of course), just in time for you to plan your weekend shopping! Feasting Fridays will begin this week, and we will be starting with some recipes from the new book, which has a mini-cookbook in the back. The Parlor and the Kitchen will kick off next week.

Places to eat in Montreal:

Toque
Posted by Stacey Ballis at 9:13 PM No comments:

Happy Birthday To Me

Today, as many of you know, I am 40. My parents find this nearly impossible, as they too are 40.

I know for some, hitting a milestone like this is more bitter than sweet, the official beginning of Middle Age. But for me, I take great pleasure in hitting the big 4-0.

First of all, it means presents and cake. How on earth could that be bad?

Second, I am smart enough to know how blessed I am, and I have truly never been happier, never been in a better place, never been more delighted to be me as I am right now.

And I’m old enough to know that you have to ask for what you need or you don’t have the right to be disappointed if you don’t get it.

Want to help me celebrate this milestone? That’s the easy part…

, is coming out September 7. It is a book about a chef in Chicago who is also 40, who has her life turned upside down when, after struggling for two years to lose half her body weight, her husband up and leaves her for a woman twice her size! I am very proud of it, and I think you and yours will enjoy it. There is even a mini cookbook of recipes in the back!

The book is officially available for pre-order on Amazon. Here is what pre-ordering does for me…the more people that pre-order the bigger the buzz. Amazon’s computer server will start thinking that this is going to be a big book and it will get moved up in the roster of pop-ups and suggested reading hints. My publisher will see the pre-order numbers and think it is going to be a big book and will do a larger print-run. The sales force will see the larger print run and know that they will have to push the book harder with the bookstores, who will order more copies, and the more copies they order the better the in-store displays, and the better the displays the better sales and the better sales the happier Stacey is to be 40! Plus it helps with the whole “I’d really like to get another contract write another book for you people to read.” thing.

So, in honor of my birthday, I am asking you to click the link below and order your copies! (Note, I did say copies, plural. I’m 40, people, let’s think in multiples, shall we?) Send a note or forward this one to everyone you ever met, even the people you don’t like very much, and encourage them to order copies. Put it on your book club’s calendar for the Fall, and get them to order their copies. Post it on your Facebook, write about it on your blog, Tweet to your heart’s content!

My personal goal is to get to #40 on Amazon in honor of turning 40. So check the numbers periodically during the day, and if I’m not there, well then, order more! Tweet louder! It’s Tuesday, people are bored at work and the weekend is a million miles off, so get your whole office in on the game.

I adore you all and thank you in advance for your support, your well-wishes, and for being a part of making my life so wonderful.