The Parlor and The Kitchen- Chopper

I am a true Gemini in many ways. Which can be frustrating, since I am often of two complete minds about things, both sides may make sense to me, and it can be hard to reconcile the two halves of my odd whole.
Kitchen equipment is a perfect example.

On the one hand, I generally appreciate and subscribe to the Michael Ruhlman

school of thought, which is that any good cook only needs a few basic quality tools to practice their craft. I absolutely know that most of my cooking takes place in one stockpot, one large skillet, and one small saucepan. There is frankly not much I cannot do with these three pots.

And yet, between my three C’s (cast iron

) I own no fewer than 29 various pots and pans: 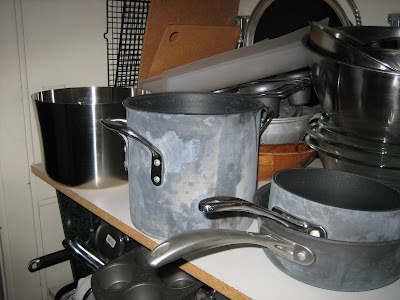 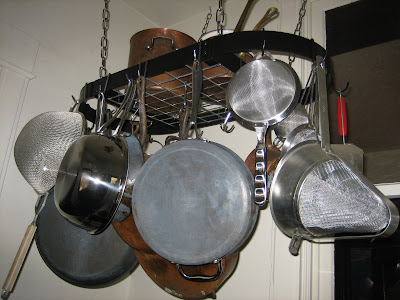 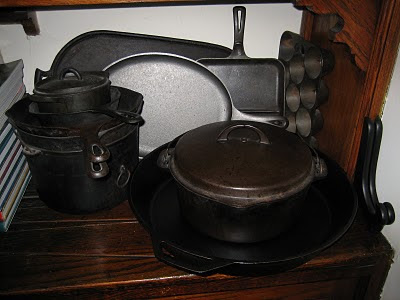 haunts me, many shapes and sizes of Le Creuset

seem to want very much to come live at my house, and I await with baited breath my next visit to Paris where I fully intend to lose my s*** in the aisles of E. Dehillerin, where Julia Child bought her favorite cookware. 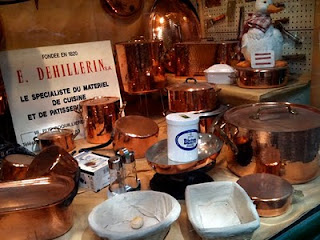 (It is important to note, that one of the many many amazing surprises about Charming Suitor, and one of the first things he shared with me that made me know we were destined be together, was his admission that when he goes to Paris he takes an extra empty suitcase so that he can FILL IT UP AT DEHILLERIN!!!!! I mean really, who would not fall in love with a man like that?)

I know in my heart that all I need is a regular spoon, a slotted spoon and a spatula, maybe one pair of tongs. But there are these: 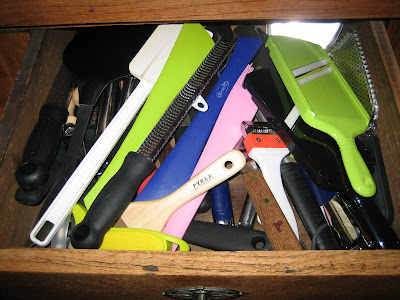 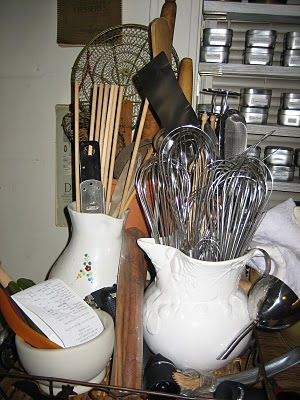 I want to be a smart cook, I want to have an organized and uncluttered kitchen, I really do. At least, half of me does. That half wants to cook simple, with a few high quality, well-loved classic items that will serve me my entire culinary life.

The other half wants my kitchen to look like Sur la Table and Williams Sonoma got together and became the Duggars of the food world.

It is a curse.

Take cutting and chopping. I know that 95% of my slicing and dicing and mincing happen with a good 8” chef’s knife

and a 4” paring knife

. Did that stop me from acquiring: 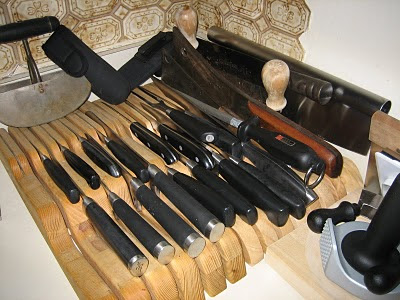 Wanna know where else that Gemini two-headed monster comes in? Skill vs. laziness.

I have excellent knife skills. Significantly above average. I’m not Martin Yan, and I do have to watch what I am doing, but I am very VERY good with a knife. I pride myself on my knife skills. But I do so hate to have to do more than minimal prep. It takes so long. I am not patient. I just want to get to the cooking already. I know a lot of cooks who love prep, they find it soothing, it calms their minds. Not me. I like the action. The sizzle and the simmer and the stirring and the tasting for seasoning.

This is why I have a big food processor

. And a little food processor

. And infinite other tools designed to take the muss and fuss out of all that chopping.

Which the creates the new problem for the lazy side of me…schlepping the equipment down and setting it up and then the cleaning up, which takes up all the time one saves on the whole not-chopping thing.

When everyone and their brother started coming out with their own version of a tiny easy tabletop chopper, I succumbed. That smacking the chopper looked so easy and fun on TV, there were oodles of versions at Bed Bath and Beyond, and most of them were pretty affordable. Who is sassier than Brian Boitano using one to salsa music on his oddly entertaining cooking show? And while I find the Slap Chop

guy creepy, he does make the equipment look useful. I didn’t have (and still don’t) any desire to try and make salsa right on my cutting board, or mix up tuna salad “in a flash”. I just want to chop up my onions and garlic and shallots and other basics quickly and efficiently. So I succumbed to the siren call of the mini-chopper.

They had such promise.

I tried (and immediately gave away) about three or four of them. They were weird to use, you practically had to chop the stuff yourself to get it to a size that the gadgets would work with, and they were awkward to clean. They would chop some of the contents to a fine mince, while other pieces were still huge. They couldn’t handle much more than a quarter of an onion, and really, when do you need only a quarter of an onion?

So when Kuhn Rikon sent me their Swiss Chop Chop

to try out, I was cautious. It looked cool, with its reasonably large capacity, two spinning blades, and the funky ripcord mechanism. I liked the idea of the little arm at the bottom of the bowl to keep contents moving towards the blades. But I had been disappointed so many times, it made me more than a little bit skeptical.

But I am skeptical no more.

This thing actually works!
I threw in two shallots which I had peeled and halved, and with ten pulls, they looked like this: 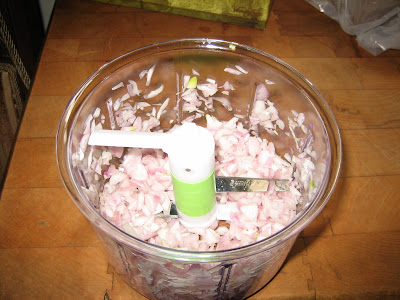 It made quick work of minced garlic, and was big enough to do a whole onion a once. It comes with a lid, so you can use it to store things, which is pretty handy. Because of the whole pull-cord mechanism, you can’t put the top in the dishwasher, so that isn’t ideal, but the rest of the pieces do go in, which is good for the clean-up factor. All in all, it was definitely the best version of any of the mini manual choppers that I have used, and I have a feeling it will be in regular rotation at my house.

Yours in good taste,
The Polymath
For your very own, click here Kuhn Rikon Swiss Chop Chop

Posted by Stacey Ballis at 6:00 AM