Hello Chickens, and Happy Monday!  Hopefully none of your brackets are busted...

Now that you have all seen the most formal space in the house, I thought we’d pop downstairs to the basement for the least formal spaces!

A lot of this will be a repeat for those of you who have been with us since the beginning, but since the basement was the first level we completed, it seemed worth revisiting.

Here is the landing at the bottom of the stairs, which became a very convenient little museum of odd things. 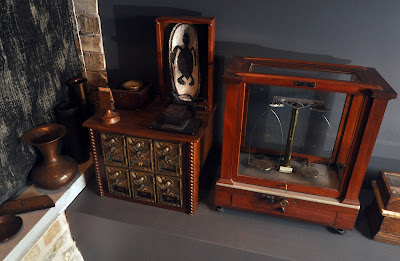 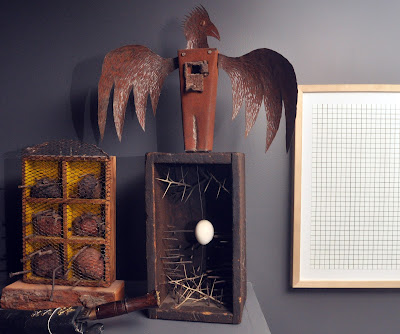 The stairs also created this little nook that we made cozy. 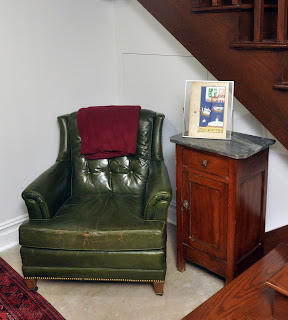 The media room, as you might recall, was one of the more energizing projects. 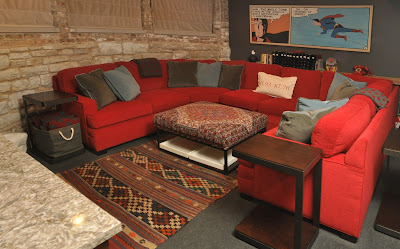 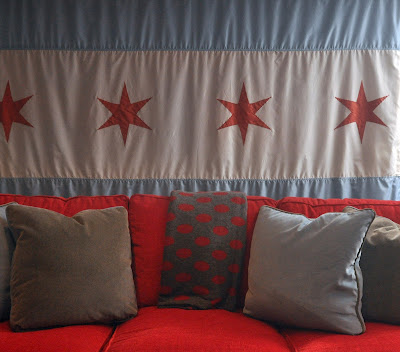 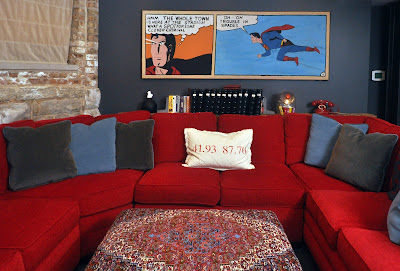 Two and a half years later and we still love hanging out down here with pals.  It is an ideal spot for movie nights and game nights and sporting events.  The color on the walls is Sherwin-Williams Peppercorn, which might be my favorite charcoal gray ever.  And the Walter E. Smithe red couch still looks new even two years later.  The beverage center is Marvel, and we are always shocked at how much it actually holds.   The Chicago flag is vintage, it used to fly over Navy Pier when it still belonged to the Navy!  And the painting which inspired the whole design of the room is an original by my dad.

The work out room continues to be the nicest possible place to do the least fun thing. 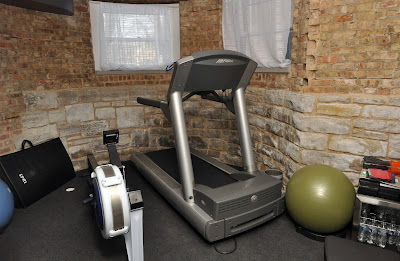 Charming Suitor, as you all know, is a serious wine collector, and so the wine cellar was a space we really needed to get right! 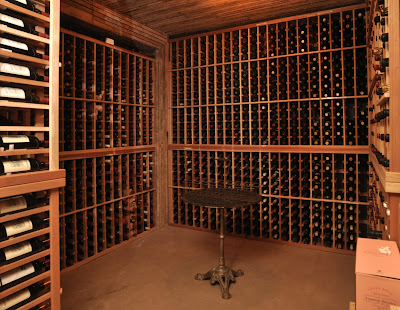 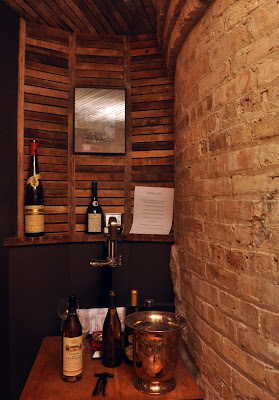 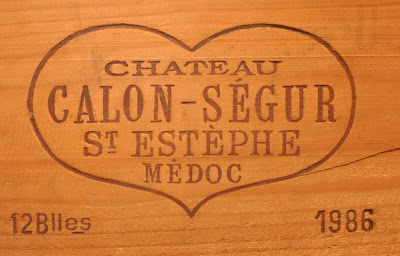 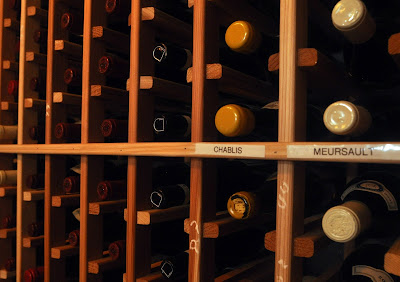 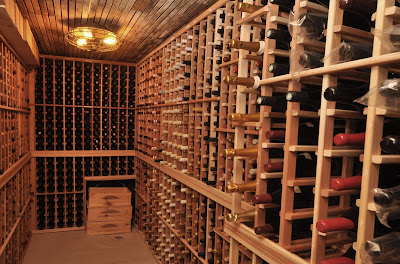 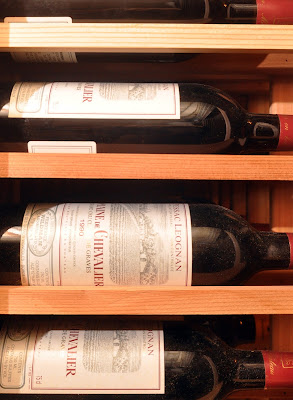 Vinotemp did all the custom racking as well as providing the equipment that maintains the temp and humidity.  All the bottles are sleeping happily, as is the country ham.  Our contractors did all the details like reusing the lath from other areas of the space that got demoed for cladding the ceiling, and creating trim and wainscoting out of the old staircase we removed.  Geniuses!

We loved having this bathroom as our primary bath for eighteen months while we waited for our Master Bath to be done. 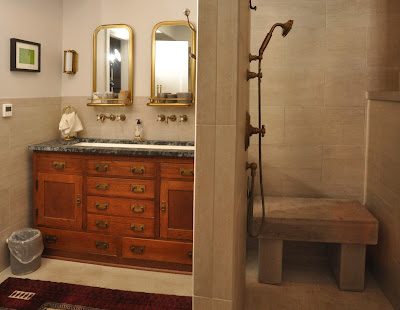 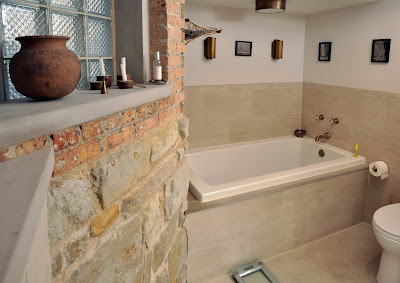 Guests really like this bathroom, with the giant soaker tub and walk-in shower.  I love the long Wetstyle trough sink, which gave us the functionality of separate faucets without the look of two bowls, which isn’t my favorite.

This is the smaller of the two guest rooms down here, and we went with something of an Indochine look, starting with a British iron and linen campaign bed, and then bringing in lots of Asian touches. 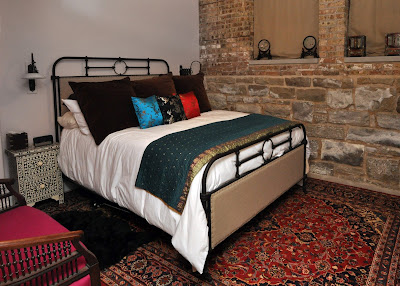 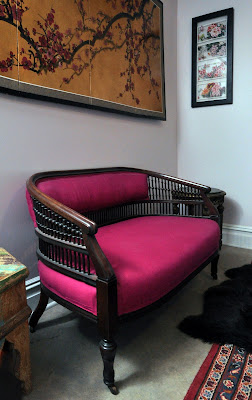 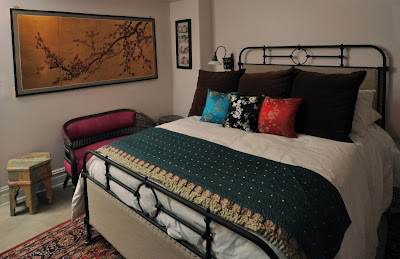 This is the larger guest bedroom. 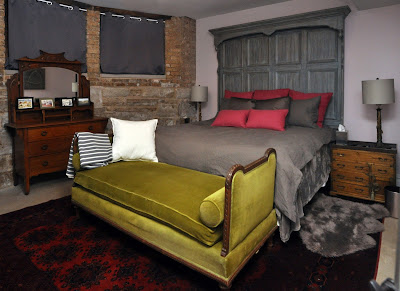 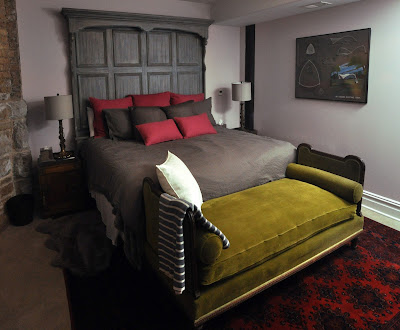 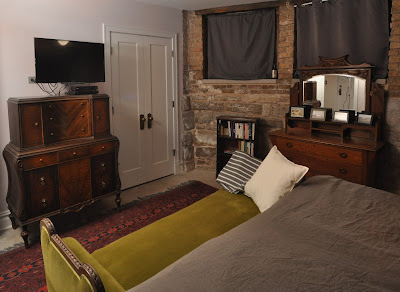 The rest of the basement is devoted to storage and mechanicals, but we love that it is almost like a little apartment down here for when friends or family need to come for extended stays!

We’ll be headed up to the second floor in a few days, so stay tuned!


The Polymath
Posted by Stacey Ballis at 8:30 AM