Dear Chickens-
Popping my head up to say hello and address a recent event that some of you might have read about over on my pal Jen’s blog.
Now you all know that Jen is my bestie.  I get the benefit of her company, counsel, and generosity of spirit.  We make each other laugh till we almost pee.  And we are women in our 40s, so that is NOT a euphemism.   Being Jen’s BFF is a constant source of joy for which I am always grateful. 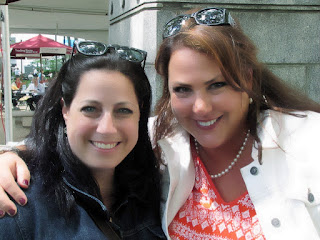 But never so grateful as when something happens like happened today.
In order to best explain this, I am turning to Jen herself, who has posted the event from her perspective on her own blog.  I am reprinting her post with her permission, and you will see my notes interspersed….

From Jennsylvania.com:
Sometimes what I write and what I mean to write are diametrically opposed... like, when Ambien is involved.
Stacey’s Note: Jen and I have had many discussions about the Ambien thing, where I have STRONGLY encouraged her to turn off her computer before she takes the pill, and then to immediately get into bed without her iPad after.  Jen, does not always take this sage advice.  Especially since, despite the air of authority I adopt when discussing this with her, she knows that I am not, in fact, an MD.
Now, a quick caveat before someone signs me up for the Betty Ford Center - the Ambien stories are few and far between.  Ninety-nine percent of the time, I take my pill, read my book, possibly eat a piece of cheese, and then fall asleep, exactly as God and Sanofi-Aventis intended.
Stacey’s Note: Ninety-nine is not one hundred.
It's only about one percent of the time that anything happens, e.g. ordering Barbie heads, skinny jeans, or seatbelt extenders.  And the odd reaction is usually the result of either being dehydrated or not having consumed enough protein during the day.
Point?
Last night, I was the one percent.
Stacey’s Note: Like I said.
To backtrack, I had guests up here this weekend.  One of my friends mentioned first how her dentist doesn't do teeth whitening and then later that her dermatologist doesn't perform cosmetic procedures.  As I am nothing if not business-minded, this made me twitchy.  I kept exclaiming, "Your doctors are leaving money on the table!"
(Note: no one else seemed bothered.)
Stacey’s Note:  This is because MOST people are not concerned about their medical professional’s bottom line, and are just grateful that these people are not hocking at them to whiten teeth or pump face full of fillers when we just need our six month cleaning or annual mole check.
Such was the extent that the doctors' lack of entrepreneurial spirit bothered me, I kept thinking about business-type ideas after my friends left.
Stacey’s Note: Even sober, this is not a good idea.
I would look at the most basic of household items and then come up with suggestions on how one might profit from it.
Stacey’s Note:  And before you ask, no, this is not the first time this has happened, and yes, I do my best to talk her off the ledge before she goes public.
For example, I happened to be cleaning out the fridge when I came across a bunch of little tubs of ranch dressing left over from a packaged salad that accidentally froze and I thought, Ah, yes.. there's an idea here.
Stacey’s Note: If you think this is not going to go well, you are correct.
So I began to figure out how one might monetize ranch dressing.
Stacey’s Note: Apparently the whole multimillion dollar ranch dressing industry that ALREADY EXISTS did not occur to her.
I came up an "I'd dip that in ranch!" campaign, envisioning it as a Stuff White People Like-type tumblr.  Every day I'd feature some beautifully photographed item that would be made more delicious when dipped in ranch dressing, e.g French fries or grilled cheese sandwiches.  Seriously, name almost anything and it would taste better dipped in ranch.  Like, a stalk of broccoli is nice, but dipped in ranch?  It's a treat worthy of a dinner party!  But I'd make each entry funny, like one day showing a shot of Channing Tatum, because, come on, ladies.
Stacey’s Note:  Oy.
Channing Tatum dipped in ranch?
Yes.
Stacey’s Note:  No.
Then I pictured said website becoming a cult favorite and all of a sudden Big Dressing comes a-calling and offers to buy the whole thing for a check containing many zeroes.
Stacey’s Note:  Jen fails to see that once you run through the gamut of readily available produce and the cast of Magic Mike, this very quickly becomes boring.  Anyone else really tired of Iron Chef America?  Want to know why? They have used all the good secret ingredients and are now just going through Bob’s Big Book of Fish and filming episode after episode of Fish Battles.  I don’t care if this is the white flaky fish from Hawaii, or the white flaky fish from the Caribbean, I. Am. Bored.  Fish Battle, schmish battle.  No one is making ice cream.  But I digress….
Brilliant.
Stacey’s Note:  No.
(FYI, Fletch thought this idea was dumb, particularly the Channing Tatum part.)
Stacey’s Note:  Fletch is correct, on both counts.
(Fletch is not a visionary.)
Stacey’s Note: This is irrelevant, it doesn’t make him wrong. Steve Jobs was a visionary.  I'm not seeing the iRanch in my fridge.
Yet I cracked myself up about this the whole night and at random intervals, I'd shout, "I'd dip that in ranch!" to the point that Fletch went upstairs to watch Falling Skies by himself.  (He said he was going to anyway.)
Stacey’s Note: I cannot blame him.
I kicked the phrase around so much that it actually began to morph into an idea for a television pilot - I envisioned a couple of best friends who adore each other but are polar opposites, yet circumstances force them to live together.
Stacey’s Note:  Oh, here we go…
I'm talking The Odd Couple meets Two Broke Girls only less Tony Randall and fewer graphic discussions of ones downstairs ladyparts.
(By fewer, I mean none.)
Stacey’s Note:  NIPPLE.  Nipplenipplenipplenipple.  Sorry, couldn’t resist.
Somehow they'd come together in this pilot and all the action would turn because of the one roommate's passion for trying to make the "I'd Dip That in Ranch!" website happen.
Stacey’s Note:  Hmmm.  Wonder which roommate this would be?
They'd end up fleeing from corporate America to run a food truck and would have hilarious and delightful misunderstandings in the neighborhood and with one another.


Stacey’s Note: To be clear, Jen and I could absolutely live together.  We are both very respectful of each other, have an awesome time, and recognize that we are of an age when we need separate bathrooms.  I have total faith that if we were young and single we could be awesome roomies.  Provided it was just Jen, and not “Jen and Menagerie”.  Two Broke Girls?  We can do.  Stacey and Kate Make Eight?  Uh uh.  I’d be out the door, banging younger girls with tramp stamps and endorsing Ed Hardy within a week.
I'm not kidding you, I would watch this.
Stacey’s Note:  Yes.  Yes she would.
I would.
Stacey’s Note:  Jen would watch “I’d Dip That in Nair” if Andy Cohen produced it.
I mean it.
Stacey’s Note: We know.
Oh, come on.
It's not the worst idea in the world.
Stacey’s Note: Yes.  Yes it is.
(Cavemen, anyone?)
Stacey’s Note:  Touché.
So, I knew I was seeing Stacey for lunch today and I made a mental note to mention it to her.
Then I took my Ambien.
Stacey’s Note: You all see where this is going.
That's when my silly little idea began to take on epic proportions.  I figured I'd best get this down on paper before anyone stole it from me or did it first, so I grabbed my iPad and wrote Stacey:
Stacey’s Note:  I woke up this morning to find three things in my inbox…two e-mails from Jen and a note from Twitter that Jen had mentioned me in a tweet.
This is the first e-mail, arriving in my inbox at 12:30am, annotated:
Okay,do not let my Ambien buzz dissuade you for the badness poroporotins i'mma put I from of you to tomorrow with out new pilot we're writing based Ion the nicotine "I'd dip that in ranch!".
Stacey’s Note:  I know immediately that Jen has ignored my excellent advice once again.  I can mostly deduce that she has a proposition to bring up to me at lunch, and that it involves a tagline involving ranch, and apparently, smoking?
See, yiu're an uptight felix foodie and I'm your bestie Oscar who just lost her house and has to move I wit tiy.  We clash over our differences but bond ove the one. Niversal truth - evening tasted better dipped in ranch.
Stacey’s Note:  Okay, Felix and Oscar I get, and I get that in this pilot we are apparently writing, they have to live together.  So apparently at the moment this pilot idea is entirely cribbed from the plot of The Odd Couple,  but with girls and ranch dressing.
BEETS OON RWNCH!
Stacey’s Note:  I do not like beets with ranch.
Friend pickles in ranch!
Stacey’s Note:  Pretty sure she means FRIED here, and yes, that I can get behind.
Freshu veg with ranch!
Stacey’s Note: Closer to English, and sure, who doesn’t love fresh veggies with ranch?
French friens with ranch!
Stacey’s Note:  Most of my French friends are good without dressing.
And we ciudk go to town with a food truth and lake stander shy try all out four shit with ranch and theync'd be all RANCH RANCH YES YKU ARE GIRL GENUSISES
Stacey’s Note:  This is just fairly incomprehensible.  The combo of Jen’s finger/iPad problem and auto correct is not helping.
E
I
Stacey’s Note:  E I O?
We ciudk trademt k "I'd dip that in ranch' and the sell to the hidden valley consortium for ALL OF the THINGS
Stacey’s Note: Not just SOME of the things, ALL of the things.  Also?  Exactly what is this consortium of which you speak?  Is this like The Authority?  The Tribal Counsel?  Can they vote us off the island?  Is Austin Powers getting involved?
THIS IS GENIUS GENIUS I AM TELLING YIU.
Stacey’s Note:  Yup, you are telling miu.
All UR buttermilk are belong to us!
Stacey’s Note:  Anyone need buttermilk?  Apparently Jen and I are cornering the market.
pS copied fletch o case he needs to ruthis past the lawyers land accountants and they keepers of the RWNCH
Stacey’s Note: Fletch was, in fact, CCd on this email. This is why Jen is not allowed to have the email addresses for the lawyers or accountants or “keepers of the RWNCH”
MEEELIONS AMD MEEELIONS AND MEEELIONS OF DOLLARS FOR US!!
Stacey’s Note: To be clear, this part I like.
See YIU tomotto!!!
Stacey’s Note:  Sigh.  Here was the second e-mail, sent precisely seven minutes after the first.
Well.  Did YIU read it yet..?.
Stacey’s Note:  Oh yeah, I read it.  Then I saw the tweet:
@staceyballis - checch your email for brilliant Ambien bindersest plan! He who controls The RANCH CONTROLS HE WORLD,!!
Stacey’s Note:  Bless her heart.
I particularly like how I misspelled/autocorrected everything except for the "Hidden Valley Consortium."
Stacey’s Note:  This did not go unnoticed by me either J  Jen and I had lunch today.  Imagine my surprise when she ordered fries…with Thousand Island dressing.  Stay tuned to see what new porposieshumns come my way tonight….
Posted by Stacey Ballis at 5:15 PM