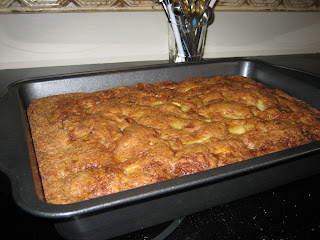 Some of you may be asking...really?  After 31 days in a row, you just leave us stranded for almost two weeks?  To which I say, um, YES.  A whole month of daily posting left my brain a little bit barren, and frankly, you wouldn't have much wanted to read anything I would have wanted to say.

Plus, when one decides to get married in four months, while it eliminates the long waiting to say I do, it amps up the wedding planning significantly!  We have been very fortunate, and have managed in the past week and a half to identify a date (SOON!), a guest list (TINY!), a location for the ceremony (HISTORIC!), a place to have dinner after (DELICIOUS!), someone to design a dress for me and others to make a chuppah for the ceremony (THANK GOD FOR TALENTED FRIENDS!), and of course, very important for us, the cake (GORGEOUS AND DECADENT!).  Working on photogs and flowers this week, and have set a personal goal of having this puppy wrapped up by the end of the month so I can focus on work and the new book and saying hi to you all with regularity.

But despite a solid eleven days of sharklike constant forward movement in what Charming Suitor calls my "Planning Mode", I am actually somewhat refreshed, and thought I would say hello and give you a little quickie.

Since both Charming Suitor and I are trying to eat healthier generally, especially now that wedding photos are less than four months away, I recently signed us up for an organic produce service, which drops off a box of goodies once a week.  It is sort of like a CSA, but since they aren't limited to what grows on one single farm, the boxes have wide variety in them.  I've been finding them very inspiring, since often they contain something I wouldn't have necessarily purchased at the store.  Last week we got Kombucha squash, which I turned into a yummy squash risotto.  Yesterday's box contained two large bundles of red chard, which I am looking forward to playing with.

It is also very nice to have fresh fruit in the house all the time for snacking, much better options than the holiday cookies or cheese and sausage that were tempting us during our vacation.

But sometimes abundance is problematic, and earlier this week I found myself with five pears on the verge of going over the edge.  I also had a friend coming over for tea.  Lightning bolt, quick pear cake.

For me, a quick cake is one that uses oil instead of butter, eliminating the creaming aspect of cake baking, and creating a batter that comes together in a flash, usually with just a wooden spoon, less fuss, less muss, more cake.

I hope you'll give this one a try, it is great with pears, but swap out any fruit you like...apples, mangos, stonefruit,  I think it is a really versatile recipe.

Combine flour, sugar, cinnamon, baking soda, and salt in a large bowl and whisk to lighten and combine.   Mix wet ingredients in a seperate bowl, and then add to the dry, blending well.  Fold in pear chunks. 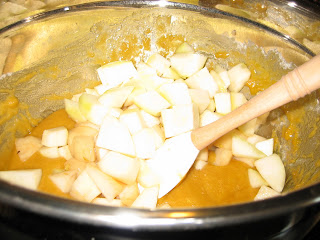 . It wiill look like  there is not enough batter. Do not worry. Bake 325 for 40 minutes till skewer comes out clean. Cool before cutting.

Let me know what you think, it is a lovely afternoon snack, and with a scoop of ice cream, a dessert worthy of company.

Yours in Good Taste,
The Polymath
Posted by Stacey Ballis at 10:20 AM