The Parlor and the Kitchen- Legal Matters

As Charming Suitor will tell you, I have two small substance abuse problems. The first is Puma

s. The shoes, not the large jungle cats. I adore Pumas. You can wear them with almost anything. I have been known to hide a pair under a floor-length black tie gown. They are incredibly comfy, come in a super variety of styles and colors, and are not ridiculously expensive. I have been wearing Pumas as my signature shoe for nearly 20 years. I discovered them in college when I would take local overhire roadie gigs for touring bands coming through Boston, and was doing 24 hour calls…they are light and have good grip, and surprisingly good arch support. I continued the love affair when I came back to Chicago and was teaching High School. Again, needing to be on my feet most of the day, but wanting cuteness as well as comfort, and Puma helped me out. I may or may not have over 35 pairs. For a 20 year collection, that does not seem SO bad. Charming Suitor may or may not disagree with that assessment, but he did buy me a new pair as a part of my birthday palooza! 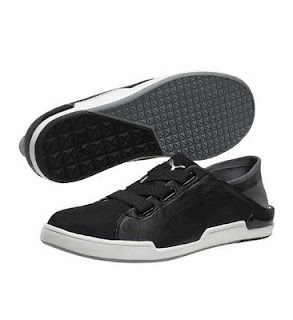 The second substance abuse problem concerns procedurals on television. I love a procedural. Especially a legal or police procedural. All the Law and Orders

…my TiVo is filled with procedurals old and new. What is on my Netflix queue? All of Prime Suspect

. What did I just finish? Pie in the Sky

, a British procedural WITH FOOD! Shut up. Talk about meant for me!

My addition to procedurals, unlike my addiction to Pumas

, provides some random bits of knowledge that can be useful while doing crosswords, and occasionally while supporting friends in small legal battles. I recently told a pal who is peripherally involved in a custody case that the kid needed a guardian ad litem. Her head almost popped off when she informed me that the judge had just appointed one that week, in a tone that said WHY DO YOU KNOW THAT? I just said that I am a Polymath, OF COURSE I knew that. I may not have kids of my own, but I watch a lot of television where there are kids in legal trouble.

Despite my completely television-based knowledge of the law, I apparently do not have a good track record when it comes to needing to call the Police. Not Sting

et al, although I would if I had their numbers.  Not Officer K, one of my bestiest of best pals, and my brother from another mother (seriously, I send his mom Mother’s Day cards) who I talk to all the time about things having nothing to do with the law…I mean actually dialing the POLICE. And this week, I was reminded of this fact.

Let us first flash back to several years ago. Book Expo was in Chicago, at the massive McCormick Convention Center. My folks were out of town, so I borrowed their downtown apartment so that I could be closer to the action, and a quick cab to all the dinners and drinks events. Mom and Dad live in a great low-rise apartment building that faces a small access street. My second night, I got home at around 2am from some serious publisher-sponsored partying. I stepped out onto the small balcony to get some fresh air before bed, and looked down onto the access street. A car pulled up, sort of a beat-up little sedan, and a guy got out. He stood in front of another nondescript sedan, one that was parked. The beater he was in drove away. He looked right. He looked left. He removed something from his backpack, got very close to the car, and began making an up and down motion with his arms. Then he opened the door and got in. I heard the sound of a car trying to turn over unsuccessfully.

HOLY CRAP! He is trying steal the car!

I ran for the phone and dialed 911. I gave the address. I gave a very good description of the guy and the car and the series of events. My procedurals have taught me to pay attention, the car was silver, not white, the guy was wearing jeans and a red baseball hat, he had no facial hair, and looked from my bad angle to be about 5’9”. In moments, five police cars arrived at the scene, three blue and whites and two unmarked. (Mom and Dad live in a nice neighborhood. ‘Nough said.)

They pulled up and blocked both ends of the street. They opened the door and hauled this guy out of the car and threw him on the hood, patting him down. They handcuffed him behind his back. From my perch behind the curtains on the balcony, I felt like a superhero. I have saved some poor person from having their car stolen! I am a Good Samaritan of the highest order! I am not one of those people who just ignores the situation, as if it doesn’t involve me. I am….um….

Why are the police un-handcuffing the perp?

One officer is looking at a piece of paper. Another is shaking his head. Several others are headed back to their cars. The officer with the paper hand the sheet back to the hooligan and shakes his hand.

Wherupon the nefarious criminal mastermind gets back into the sedan.

Because I? Called the cops on some poor guy who had locked his keys in his own car and was just trying to go home.

I have never felt like such a dumbass. Except maybe when I told my returned parents what I did and my Dad noted that he was “So very glad you dialed 911 from MY HOME NUMBER.”. Ooops.

Last week, I arrived home to see a very old and beat up car I did not recognize parked behind my building. There are only three units and four spaces for the building, of which two spaces come with my unit. Lovely D who lives in 2 parks in a garage across the street most of the time, and Actor Jim who lives in 3 parks his small four-door in the back along with me and Charming Suitor. So often there is an extra space, and when D’s family comes to visit, they use her space. But I had never seen this car. And it was a doozy, probably from the late 1980s, huge and with two doors crushed in, one side mirror missing, rust spots everywhere. D was out of town, but it was possible her granddaughter had stopped by with a friend….

But in the morning, the car was still there. And when I ran into Jim in the hall, he didn’t know anything about it. So I? Called the police.

I started with 311, since having a car towed from my parking space didn’t seem like much of an emergency. They transferred me to 911, which seemed extreme, but I figured they knew what they were doing.

I explained to the woman on the phone that someone had abandoned a car in a private parking space and it needed to get removed.

She informed me that since it was parked on private property and not on the street, they could not tow it.

“But it is parked illegally.”

“So you have to call a private tow company.”

“Why would I pay a private company to remove a car someone has abandoned?”

“I’m just telling you that if you want the car gone, we cannot remove it today.”

“When can you remove it?”

“You can submit a request in writing and then after 30 days..”

At this point I had gone onto the back porch, so that I could give an accurate description of the car and license plate to someone. Across the way a guy was smoking on the back porch of the building next door. He must be new, hadn’t seen him around. I gave the “I hate talking to incompetent people shrug to him”, and continued to try and convince the woman at 911 that they should come remove the offending vehicle.

“Are you telling me that anyone can just show up and leave unwanted things on private property, and you can do nothing? I have to call and pay a private company to remove an ILLEGAL car from a place it is not allowed to be? Someone abandons this sad beat up old hooptie, which for all I know could have been used in a crime or have a dead body in the trunk, and if I want you to take care of it, I have to wait over a month, just because it is private property? If the owner of this enormous piece of crap comes back and breaks into my house to kill me, should I submit a written request to have him removed from the premises?”

The woman on the phone was about as patient with me as I was with her.

“I’m sorry you don’t like what I am telling you, but it doesn’t make it less true. We cannot remove a car from private property without documentation and investigation. If you want it gone, call a private tow company.”

“Look I know it isn’t you making these rules, but you can see how it would not be logical and would be frustrating for me…”

“Yes. A private tow company. I get it. Thank you for your time.”

I hang up. I am unbelievably frustrated, but cannot deal with it as Charming Suitor and I have someplace to be. We head out, and when we get to the back, the offending car…is gone.

Walking around the corner, is the Smoking Man. He looks sheepish.

“Hi, um, I’m really sorry. That was my car, and I’m visiting my friends who live here and none of them drive, so they thought that I could park there, and we didn’t know it wasn’t allowed, and I’m really so sorry for the inconvenience.”

“Okay, well I’m just relieved it wasn’t abandoned, but yes, please tell your friends that this is private parking and that their guests need to park on the street.”

“No problem! Thanks for taking care of it.”

CS and I got in the car and headed out. After a while, he looked at me and said “Hooptie?”

Which reminded me that this poor guy had to listen to my repeatedly denigrating his car as a piece of shit WHILE trying to get it towed.

Clearly I need a Law and Order: Parking Court to launch so that I can bone up on car-related legal issues. I’d sign up for that show as fast as my little Puma-clad feet could take me!

In the meantime, it also made me think about neighbors. And being a good one. Which made me think about brownies. After all, whether welcoming a new neighbor to the area, or apologizing to one you might have offended, you are hard-pressed to go wrong with brownies. They are quick to make, cheap ingredients, and everyone loves them.

Here is the recipe I have in my card file, in my mom’s elegant script, listed as Aunt Esther’s Brownies. I have no idea who Aunt Esther was, but the recipe is killer and is my go-to for brownie deliciousness.

Here is the recipe exactly as written:

I leave out the nuts, preferring just chocolate. Especially for gifting, since you never know when a nut allergy can trip up a perfectly good gift.

Yours in Good Taste, (and sometimes bad judgement)
The Polymath
Posted by Stacey Ballis at 12:10 PM