To Xfinity And Beyond!

So it’s been all AV Club up in here, and let me tell you, that is no small feat.  Let’s sum up:

The building is from 1907 and a lot of the electrical had not been upgraded since the mid-seventies. Our commitment to the building was always that we would bring infrastructure up to 21st century functionality and quality, while still celebrating the parts that are old world.

This makes for some fun details.  For example, while we will be using the latest technology for internet, phone, cable and home security, we are not creating a “smart home”, so lights go off and on from the flip switch on the wall, and our intercom system is officially the restored set of speaking tubes that are original to the building.

We also have the additional complication of living in the space while under construction, so we can’t upgrade everything at once, since we are only opening walls where we don’t inhabit the space daily.

This has been a Comcast home since I moved in in 1993, and I’ve always been mostly satisfied with the service.  I’ve been bundled with phone, internet and cable forever, and in general, any problems I’ve had have predominantly been area outages, the equipment and service inside the house has always worked well and they’ve been good about periodically swapping it out for new when their systems upgrade.

Not that it’s always been perfect.  About five years ago, when upgrading the system, they brought me their DVR box.  I’d always been a TiVo girl, but I was game to see what their equipment could do, since it came free with my service.  In a week, I sent it back and re-installed my trusty TiVo.  The functionality of that box was clunky and complicated and not intuitive.  The search function took forever to type in shows, and it was difficult to manage priorities, and the storage capabilities were minimal.   By comparison, my TiVo was light years ahead, and we used it happily, only bemoaning the fact that you could only tape 2 shows, and couldn’t watch anything else live if two things were taping.

When we started talking about the renovations in the house, we realized that we were going to seriously upgrade the whole media experience.  We had only ever had two televisions, one in the living room and one in Charming Suitor’s mancave.  But we were adding a designated media room, as well as an exercise room and two guest bedrooms.  And I know two things:  If I’m going to walk on a treadmill to nowhere, it goes a lot faster if I have a Real Housewife or two to keep me company, and that I wanted our guest rooms to feel like wonderful little hotel rooms, so that meant televisions.

I called Comcast and explained my situation, and they sent over a supervisor, to talk to me about our needs and our complex building, and do a walk thru with my contractors.  We decided to temporarily run the two floors we are occupying as separate entities, since we had the opportunity to run new cables in the walls in the basement, but would have to continue to use the existing infrastructure on the first floor until other areas of the house were ready and that floor is unoccupied.  A plan was designed, they recommended we do a special panel to run the whole house, which we added to the scope of work, and we laid out the plan.  Comcast sent over bundles of the right cables to our contractors so that the electrician could install them in the walls when running all of the other power.

And last week, we were finally ready for install!

The team from Comcast was amazing.  We were putting in two DVRs, one to run all of downstairs and one just for the upstairs living room TV.  A new modem, to upgrade our internet speed and run our landlines.  Three terminals in the basement for the exercise room and guest bedrooms, so that those televisions have cable.

We also had the additional complication of needing to set up some boosters and extenders to ensure that both floors have great Wifi coverage in every room.

But as complicated as it appeared the system would be, the actual install and getting us up and running was amazingly smooth.  Our main glitch was that while we were installing, you might have noticed a little bit of weather in our fair city, so there was an outage in the area.  Not ideal.   So we knew that things were running as best as we could get them on the day of installation, but we also set up a follow-up appointment just in case some things weren’t working properly once the area outage was fixed. Our technician called us the next morning to say that everything in our neighborhood was back up and running and he had us check our system.  Sure enough, we had a couple of things that weren’t as they should be, so they came back to reboot the system and get us on our feet.  Essentially, since the area was down, our new modem had not fully activated to our account, so the ultimate fix took less than half an hour!

And let me just say, as nervous as I was to lose my beloved TiVo, and worried about the functionality of the DVR, this X1 system they have created is AMAZING.  Everything I didn’t like about the functionality before, is not just fixed, it is insanely easy to use.  Totally intuitive, I can tape up to four things at one time AND watch a fifth.  Anything we tape in the media room DVR can be watched on any of the other televisions, or get downloaded to our phones or tablets for travel.  The search function is so quick and easy that I was able to set up nearly 40 television shows to tape as season passes in about 20 minutes.  On Demand is right at your fingertips, as well as some apps that allow you to quickly check the local weather, sports or traffic! (Or even your horoscope, if you are so inclined…)

I haven’t even begun to really play with the mobile apps, but I know that I can stream live TV, watch On Demand programming and download shows and movies to my devices really easily, as well as manage my account. 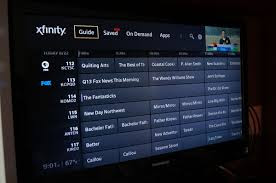 And if that weren’t enough Comcast love?  On Monday, I was called to Jury Duty down at 26th and California.  A long day, and me on deadline.  I got to the Jury Room and set up my laptop in hopes of getting some work done.  While they were making the announcement about there being no Wifi available except in the law library, which we would only have access to during our lunch break?  I was connecting to one of the eight gazillion Xfinity hotspot towers they have installed all over the city, and in no time I had four bars and was internet and email ready.  I was actually able to get some decent work done while providing my public service.

Our experience has been nothing but terrific, and while I know that many of you may have had issues with the company previously, from my experience, they have really been listening to the frustrations of customers and are very actively working to make improvements in every area.  I think it is nice that they acknowledge where they have fallen down in the past, and every member of their team that we encountered is really focused on changing the customer experience.  We are absolutely delighted, and as such, have decided to work with them on the home security system when we are ready to get that organized!

I’m going on a little bit of lockdown, as the new book is due to my editor in twelve days, but when I come back, I will be able to bring you up to speed on some more improvements!