Strumming My Pain With Her Fingers

Hello Chickens!  Are you surviving your winter?  Here in Chicago, where we have officially gotten more inches of snow than your Polymath is tall, I have just one thing to say.

In other good news, I have finished the manuscript of my next novel, Recipe for Disaster, and sent it off to my editor so that she can help me make it into a book.  You will have it in your hot little hands in March of 2015!  I know this seems like a long time, but trust me, you want it to take this long.  The only way to make it shorter would be for you to have to read the rough draft, which Charming Suitor can attest is an exercise in ignoring bad grammar, spelling errors, redundancy, and other egregious plot blips that take you out of the story and make it annoying.

While you wait, I am going to give you a little gift.  I'm going to let my friend Pamela Ribon take over the blog for today and give you a chance to win a signed copy of her new memoir... 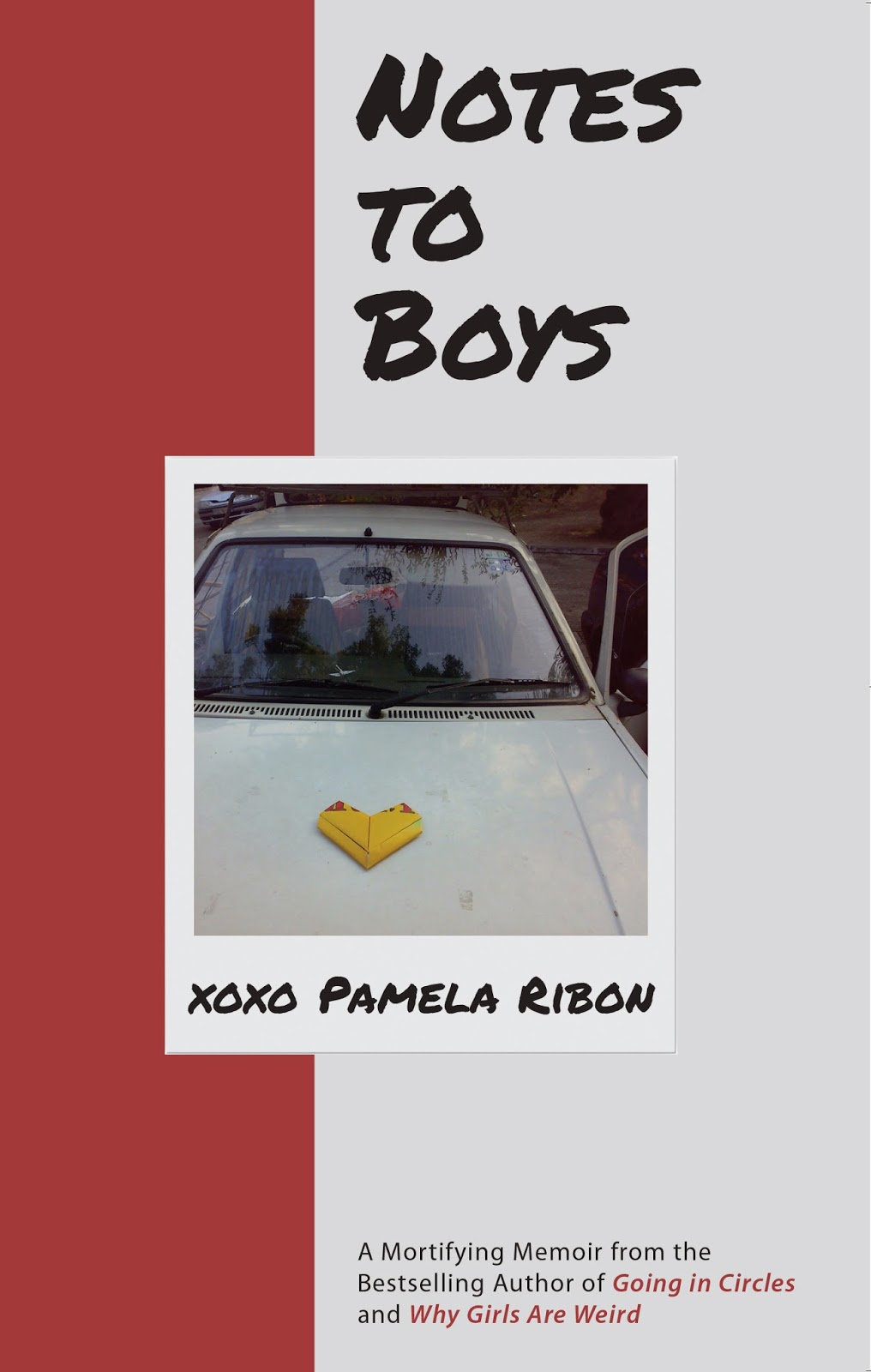 Let me just say that when I gratefully received the advanced copy of this book I was just a few short weeks away from deadline, and on total lockdown.  But I wanted to take a quick peek at just the first chapter, and I was hooked.  One of those delicious reads you literally cannot put down.  And for anyone who ever put themselves out there on a limb for love, you will see yourself in this hilarious and often poignant book.  Pamela fearlessly shares not only her stories of love unrequited, or badly requited, or totally imagined, she also shares the notes and letters she wrote to the objects of her affections in all of their mortifying glory.  The result is a book that will make you remember your past with awkward fondness, and will without a doubt make you a fan of Pamela's work for life.  There is an excerpt she is sharing with us below.  I know you won't want to wait to win your copy to keep reading, so you can buy it HERE.  While you are there, check out her other books, which are equally wonderful.

Pam has graciously agreed to give away 10 signed copies of Notes to Boys, to enter, just comment below, preferably sharing the most embarrassing thing you ever did for love by 11:59PM Thursday night, and I will announce winners (and a fairly epic contest) Friday.

In the meantime, I hand over the page to Pamela!

Yours in Good Taste,
The Polymath

I suppose technically he watched it while I watched him watching it—my eyes wide and mouth ready for the kiss I knew he’d give me as soon as he figured out that I was Albert Brooks and he…he…was my Holly Hunter.

This is where I should probably tell you that I was thirteen years old.

Needless to say, he didn’t catch the subtext. During the moment when Albert Brooks tells Holly Hunter he wishes she were two people—“So I could call up the one who’s my friend and tell her about the one I love so much.”—my young soul mate spooned cookies and cream ice cream into the crook of his bare knee and remarked, “Heh-heh. If I spread my leg apart like this it looks like a butt with poops.”

But my heart knew we were destined to be. Even the chance to watch this romantic comedy together was a miracle that I assumed was part of our destiny—I had just moved away, several states over, to a small, rural town in Texas, and for reasons I’ll never understand, both of our parents allowed this visit. He flew to my house. On a plane. He arrived at baggage claim wearing a navy blue Late Night with David Letterman T-shirt. I know you don’t need to know that, but you should know that I know that because it speaks to how important this was to me.

We only had a couple of days together—mere hours! This meant I needed him to make a move and make it soon if we were going to be young lovers running through the streets. So I took him to the most romantic place I knew. I took him to Six Flags.

I’d always wanted to be that tanned and sweaty girl in an endless line for a roller coaster. She’s wearing a flimsy spaghetti-strap top and tiny shorts as she sits on the handrail that divides the lines into rigid sections. She’s chewing gum, or maybe just letting it stretch across her tongue as she rests her dewy cheek against the strong, muscled shoulder of her boyfriend. I wanted one of those middle-distance staring, metal band T-shirt wearing, floppy-haired, unfortunate-skinned boyfriends. He’s the one standing in the space between her parted knees. He’s the one holding her weary body up as they wait for a thrill ride.

I craved that moment with a boy, our sweat-soaked love the only thing keeping us from sudden heatstroke.

But during our two-hour wait for a sixty-second coaster, my Holly Hunter only used the handrails to show me how he would skate them if he had his board. His only proclamations of love were to say, “For the love of fucking shit, why is Texas as hot as the surface of the sun?”

On his last night in my house, I got desperate. Assuming he needed the ultimate hint, I snuck into the room where he was sleeping, climbed on top of him, yanked off my shirt and put his hands on my bare chest. “I have a girlfriend,” he blurted, not without a touch of fear in his voice. “She goes to another school.”

Why was I the only pre-teen ready for a serious, adult relationship? When would someone want to talk with me at a coffee shop about Salinger and Kids in the Hall sketches? When would I find my true Holly Hunter?

The real tragedy is that nobody ever pulled me aside to gently inform me that some feelings I should keep inside, that not everybody deserves my truth. Or at least so much of my truth. Instead I was all alone and determined to find the one boy who wanted all of it, all of me, who loved my words first, my body second.

My words first, my brain second, my bookshelves third, and then my body.

No—my mixtapes! Then my body.

At some point someone should have said to me, “Hey. You kind of have a weird idea of how love goes that seems completely based on things you’ve watched on television. True love isn’t just like that time on Laverne & Shirley when Carmine and some other guy were fighting over Shirley and they got into a fist fight and Shirley tried to break it up when Carmine accidentally punched her in the face. I don’t know why you think that’s what love feels like, but listen: that’s fucked up.”

Now that you can imagine the type of girl I was as I entered my very heady, super hormonal teen years, you should also know that I had a lot of time on my hands and access to a whole lot of paper. This was before the Internet (I would normally add a “thankfully” here, but since I’m not just uploading the contents of what I wrote, I’m going the extra step to publishing them, I have no reason to be grateful for anything, and nobody to blame but myself), so there was nothing to stop me that probably keeps other teens in check these days (i.e. bullying, public mockery). I spent many, many, way too many years writing love letters, poems, stories. I wrote obsessively. Compulsively. Constantly. And for the most part, I delivered those pages straight to their intended target.

But not before I saved myself a copy.

It’s likely I kept the first drafts and hand delivered the more refined, less scribbly revision. All I know is I have boxes of notebooks and folders filled with evidence that I spent the majority of my teen years being an accidental stalker.

This is where you probably ask, But why do you still have all those boxes of notebooks and folders? It’s a valid question. The only answer I can give you is, it’s not hoarding if it’s research.

I gift that statement to the other human magpies in the world, the ones who can’t bear to toss things that hold even the slightest sentimental value. As someone who has three large bowls filled with wine corks, I understand. For those of you who still have boxes stuffed with high school theatre T-shirts or every issue of Sassy magazine, I carry your heart. I carry your heart in my heart. And I put that heart in a drawer with a whole lot of other hearts and some keychains with bank logos on them and some photo booth strips I keep planning on framing one day in a cute way and an Altoids tin of three-hole punch brads because I have a compulsion to save that’s fueled by the fear of becoming meaningless.
While most of you would probably not find it wise to publish your teenage diaries, it is an effective way to get people off your ass for saving all your shit, along with the bonus of a possible tax deduction once you reach Hoarding Level 3, also known as “I’d better rent a storage unit before I end up with a divorce.”

The first time I shared these letters and stories with my husband, we were still only dating at the time. I opened my gigantic green folder of past love and began reading one of the letters to him in an embarrassed, Gosh, remember when you used to be like this? sort of way.

I was a few sentences in when he closed his eyes. “Please stop,” he said, holding up his hand—palm out, as if he needed to shield his face from any further harm.

I was immediately sympathetic. “Oh. I’m sorry. Is it because I’m talking about past boyfriends? I get it. It’s hard to think of me loving someone else?”

There’s a certain face people make when they hear these letters. I’ve read them aloud at enough book readings and shows to be familiar with the normal human reaction. Every face is a little bit different in its severity, but it’s a clearly recognizable expression of horrified sympathy. The eyes squint, involuntarily, and the brow becomes rippled with angst. The mouth has two choices—either the lower lip drops, exposing the teeth in a way that, if the listener chose to speak, he would say something like: “Eeeech.” Or the mouth retreats, pulling back inside itself, teeth biting down—probably to keep from yelling at me, “Why are you doing this to yourself?!”

After a book reading last year, a woman around my age approached me, smiling nervously. “I just wanted to thank you for sharing your teen diaries with us,” she said. “It made me do something really important.”

Assuming she began mentoring at a high school or signed up to be a foster parent, I felt a swell of pride. “That’s great! What did you do?”

“I called my mom and told her to burn all my old diaries and journals. I told her where they were in the basement and I made sure she got rid of them. All of them. I couldn’t bear to imagine anyone finding them one day, even after I was dead, and reading them. You made me realize just how terrifying it would be if anybody ever saw them.”

I was still quite flattered.