Hello Chickens!  Wanted to introduce you to a pal of mine.  Dana Bate has just released her debut novel, a delicious foodie fiction romp that I was privileged to be able to read an early copy of and blurb.  My little recommendation even made it onto the front cover, which caused all sorts of squee-ing around here.  Anyhoo, I thought I would let Dana tell you a bit about the book and share a fab recipe with you all.  Even better?  She is giving away a signed copy to one of you lucky readers...just comment with the title of a foodie book you love and recommend to the rest of us.  Much as I love adulation, please no books of mine...I've read them and I need some new titles for my own pile!  Comment with your rec by 11:59PM on Friday Feb. 22, and I'll announce the winner on Saturday.

I'm still mostly on mental hiatus after finishing my latest, Out to Lunch, which will be in your hot little hands this December, but I will be back the first week of March with some fun giveaways, new product recommendations, and a couple killer recipes.  Till then....here's Dana!

Yours in Good Taste,
The Polymath 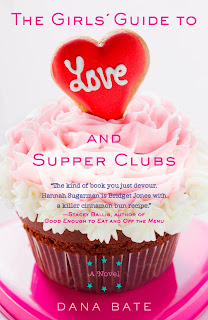 Stacey has been kind enough to let me stop by her blog and say hello to all of her favorite chickens, so that I can tell you a little about my debut novel, THE GIRLS’ GUIDE TO LOVE AND SUPPER CLUBS. Thank you, Stacey!

Here’s the 411 on the book: The story centers on a 26-year-old woman named Hannah Sugarman who is having…well, let’s call it a quarter-life crisis. She is stuck in a wonky job at a DC think tank, but all she wants to do is cook. Unfortunately, no one supports her dreams of becoming a professional cook – especially not her parents, who are both famous economics professors. Without the support system or courage to do what she loves, she instead tries to have her cake and eat it, too: she continues working at her think tank job, but on the side, she starts an underground supper club out of her landlord’s townhouse – a possibly illegal venture that becomes both highly successful and highly problematic. Let’s just say not everything goes as planned…

The story is peppered with menus and recipes for dishes like brisket, pretzel bread (highly recommended!), and smoked Gouda grilled cheese. One recipe not listed in the appendix, however, is a recipe for Hannah’s cinnamon buns – the very cinnamon buns Stacey mentions in her blurb on the cover! Given how much pride Hannah takes in her cinnamon buns, this is an oversight of the gravest sort.

And so, today I hope to make amends by sharing Hannah’s cinnamon bun recipe with all of you. Contrary to what one of the characters in the book says, these buns are pretty freaking great.

(To read an excerpt of the book, click here!)

And don't forget to comment with your favorite foodie read, and one of you will get a signed copy of The Girl's Guide to Love and Supper Clubs! 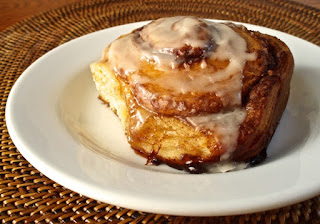 Hannah prides herself on the brioche-like dough she uses for her cinnamon buns, which makes the buns fluffy and delicious. Her trick? Layering cream cheese into the dough, which makes the rolls even softer and richer (a trick she learned in Saveur magazine). The best part about this recipe? You can refrigerate the sliced cinnamon buns overnight and just pop them in the oven in the morning. You can adjust the amount of cinnamon to your taste. For someone who adores cinnamon and can’t get enough, use 3 tablespoons; for someone who thinks a little cinnamon goes a long way, use two.

In the bowl of a standing mixer fitted with a dough hook, combine yeast, ½ tsp. of the sugar, and ¼ cup water heated to 115°F (warm to the touch). Stir to combine and let sit until foamy, about 10 minutes. Add remaining sugar, milk, light brown sugar, vanilla, egg, and egg yolk and whisk to combine, making sure the eggs are incorporated. Add the flour and salt. Mix with the dough hook on medium speed until the dough just comes together. Turn mixer speed to high and knead dough for 4 minutes. Add the softened butter one piece at a time until it is all incorporated (this will take several minutes). Continue kneading until dough is smooth and pulls away from the side of the bowl, about 6 minutes. Remove bowl from the mixer, cover with buttered plastic wrap, and set aside in a warm place. Let the dough rise for 1 ½ to 2 hours, until it has doubled in size.

While the dough is rising, make the filling. Mix together the sugar, cinnamon, and salt in a small bowl and set aside.

When the dough has risen, punch the dough down and turn it out onto a heavily floured surface. Gently knead the dough until it's no longer sticky, adding more flour as necessary, about 1 minute. The dough will be soft and supple.

Using a floured rolling pin, roll the dough into a 10" x 10" square. In a small bowl, beat the cream cheese with a rubber spatula until it's smooth and spreadable. Spread the cream cheese evenly over the dough square; then fold square into thirds as you would fold a letter to fit it into an envelope. Take the open ends of the resulting rectangle and fold into thirds again, to make a smaller dough square. Invert the dough so that the seam is face down and, using the rolling pin, gently roll into a 10" x 20" rectangle.

Turn the dough so that the short sides are parallel to you. Brush the top of the dough with the tablespoon of melted butter. Sprinkle the cinnamon sugar filling over the dough, leaving a 1" border at the edge farthest away from you. Lightly press the filling into the dough. Using your hands (and a dough scraper if you need it), lift up the bottom edge of the dough and roll it forward into a tight cylinder. Place dough cylinder, seam side down, on a cutting board and, using a sharp knife, trim off the ends; cut cylinder crosswise into 8 equal-size slices. Nestle the slices, cut sides up and evenly spaced from one another, into a buttered 9" x 13" light-colored metal baking pan. Cover pan with plastic wrap and either (a) set aside in a warm place to let rise for 2 hours, or (b) place in the refrigerator overnight.

When you’re ready to bake, preheat oven to 375°F. Uncover the buns. If you refrigerated them overnight, let them sit at room temperature for 30 minutes. Bake until golden brown and a toothpick inserted in the center comes out clean, about 30 minutes.

While the buns are baking, whisk together the powdered sugar, milk, and vanilla in a small bowl until smooth.

When the buns are done, transfer the pan to a cooling rack and let them cool for 5 minutes. Drizzle the glaze all over the cinnamon buns. Serve immediately.