When you have lived in a vintage home as long as I have lived in my apartment, certain things are comforting. You can walk around in the dark in the middle of the night without your glasses on and never bump into anything, even avoiding the squeaky floorboards. You know every quirk of every appliance, door, drawer and closet. I’ve been in my apartment almost 16 years, and I know exactly how to flush the temperamental toilets on the first shot, how to lift up slightly on the handle to the guest room closet door to get it to stay shut, and where to give a tap with my hip on the kitchen drawer that sticks when it is humid. I know that my oven runs slightly cool, and that the hood vent over the stove has a mislabeled fan, so high is low and low is high.

Some things are less of a comfort. When, on a bleary-eyed-morning-after-the-night-before you forget about the one wry stream of water in the shower that never fails to squirt you right in the eye if you don’t lean to the right. The millionth time you blow a fuse by forgetting to shut off the living room air conditioner before turning on the vacuum requiring a schlep to the basement fuse box. The drafty windows in the living room, which are great for letting in light, are also not so great about protecting me from bitter winters, and I spend the worst of the icy months wrapped in blankets and sweaters, with thick socks and a permanently cold nose like a two-legged .

Generally, I love that I have lived here so long. However, occasionally it does come back to bite me in the butt.

As a part of the big apartment Version 2.0 project, I have been altering some of the artwork on the walls. Mostly this has been just about editing, and as there is no budget for painting, I have been resigning myself to the little imperfections that are revealed when something that has been hanging somewhere for a decade and a half is removed. Small nail holes, and occasionally secondary holes that the piece was covering up are made public. Slight discoloration in the wall paint, brighter behind the removed item than around it. In one interesting twist, a sort of shroud of effect where a small hanging quilt used to be, the folds and drapes of the fabric captured in a light stain on the wall.

But nothing prepared me for the frustration I felt last week, when I went to take down six large pieces that had been hanging behind my couch for the last dozen years in order to replace them with a single large piece. This is when I discovered that the genius I used to be married to had decided that instead of using the technology and tools at his disposal to hang the pictures straight and even, he had not only put an extra dozen or so holes in the wall, he had eventually fixed the problem with the liberal application of DARK GREEN FLORAL PUTTY. Which left DARK GREEN STICKY PATCHES on the ivory walls when I removed the paintings.

Big green splotches. Not exactly the highlight of my design efforts.

I tried to scrape them off with a spatula. FAIL.

I tried to wash them off with soap and a sponge. FAIL.

I tried to sand them off with fine sandpaper. FAIL.

I was about to give up entirely when I talked to my friend Sue (set designer and former scenic painter extraordinaire) who suggested I try one of the Mr. Clean Magic Erasers 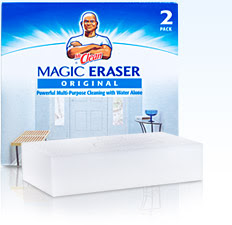 I went out and bought a pack of the ones marked Extra Power. When I opened the package I was disheartened. They didn’t look very scrubby. Really basic white blocks of foam, slightly textured on one side. I wet one and wrung it out, as per the instructions, and went to the living room to see what happened. A little elbow grease and A MIRACLE!!! Wasband splotches gone! Wall saved!!!!

You have got to try these things. I’ve been taking them all over the house, little marks and big problem areas, gone in a flash. I can’t believe how well they work. I have a feeling I’m going to be buying them by the case!

Mr. Clean is my hero.

Now if only they made a Magic Eraser for those pesky exes….
Posted by Stacey Ballis at 2:50 PM